1) SJBA is hosting a Dhamma Talk by Ven Dhammavuddho Mahathera on 27th June 2015 (Saturday), 8.30pm at SJBA Shrine Hall. The title of the Talk is “Characteristics of a Sotapanna”.

Venerable Dhammavuddho graduated from the University Malaya in 1971, and worked as an Electrical Engineer with the Public Works Department for 12 years. He was ordained as a monk in the Mahayana tradition in 1983. Three years later, he was re-ordained in the Theravada tradition in Thailand. Thereafter, he spent about 10 years living the solitary lifestyle in quiet places. He has written numerous booklets on Buddhism, e.g. Return to the Original Buddha’s Teachings, Message of the Buddha, Buddhist Monk’s Precepts, Liberation: Relevance of Sutta-Vinaya, Only We Can Help Ourselves, etc. In 1998, he established Vihara Buddha Gotama near Temoh, in Perak. Ven. Dhammavuddho is currently a Monastic Adviser of the Theravāda Buddhist Council of Malaysia.

2) SJBA’s building extension (a new 4-storey block with basement) officially commenced works on 8 March 2015. Piling works has already been completed and excavation works for the basement will be starting soon. The cost of construction of the new building is RM5 million. To-date, we have received donations of about RM 2.7 million (with another RM216,000 in pledges, not collected). We appeal for help to raise the balance in order for us to successfully complete the construction of the new building by June 2016 (contractual completion date).

4) Another Temple Building Extension Fund Raising effort is through “Imee Ooi Concert – Sound of Wisdom” on 1 August 2015, Saturday, 3.00pm at Istana Budaya. Sis Imee Ooi of “The Chant of Metta” fame as well as many other highly-praised musical works will be making a live appearance in her debut concert.

A teacher, composer, producer, director and singer, Imee is serving the Dhamma with her extraordinary talent and voice. She is a Buddhist practitioner that adheres to the teachings of loving kindness, peace and harmony. Founder of IMM Musicworks in 1997, she has released more than 50 albums and has produced many musical works for many Buddhist societies and organizations. Her mission is in singing messages of peace, harmony and compassion or simply bringing healing sounds to her listeners through music.

Tickets are now available in SJBA (at RM100, RM150, RM200, RM250 and RM350). You can now have the opportunity to support the development of local Buddhist musical talents and performance arts as well as contributing to the building extension of SJBA Vihara.

5) This Sunday (14/6/15, 10am) Dhamma Talk (in English) will be given by Bro Tan Siang Chye. Bro. Siang Chye graduated from Kent Institute, UK and with a Master degree from Massey University, New Zealand. He was a former Chairman of the Buddhist Missionary Youth Section and also the parent body, BMSM for one session. He is a striving meditator and has practised under several prominent meditation teachers locally and in New Zealand. Bro. Siang Chye is currently the Chairman of the Dhamma Committee of SJBA. 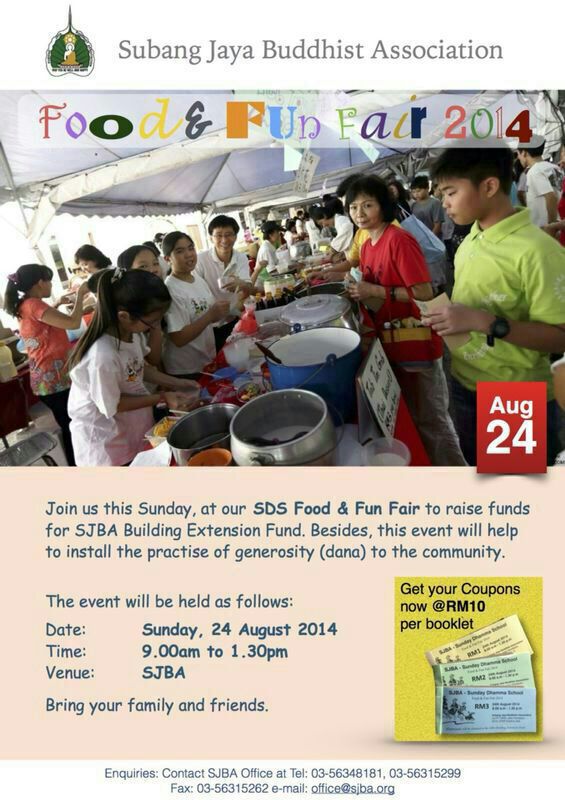 1) SJBA Sunday Dhamma School is organizing a Food fun Fair on 24/8/14 (Sunday) to raise a target of RM70,000 for SJBA Building Extension Fund as well as to inculcate into the students the Buddhist value of Dana. Sponsors and volunteers interested in participating in this Food Fun Fair are welcomed. Please contact Sis Lily at 03-56348181

2) SJBA is celebrating the country’s 57th Merdeka Day on 31st August 2014 (Sunday), The Celebration will start with a Merdeka Breakfast at 7.45am, followed by Flag Raising Ceremony, Blessings by the Venerable Monks, cutting of Merdeka cake and fellowship. Members and devotees are invited to join us for the Celebration. To encourage our members’ children to strive for excellence in their academic performance, SJBA will present Academic Excellence Awards to students who excelled in their examinations in 2013. The Awards will be given out on Merdeka Day, 31st August 2014. On the same day, SJBA is also organizing a Blessings Service for students sitting for UPSR, PMR, SPM, STPM, etc. examinations this year. The Blessings will be conducted by the Venerable Sangha Members.

3) SJBA is organising an Intermediate Course on Buddhism from 19 September to 24 October 2014. The course will run for 6 consecutive Fridays from 8.30pm to 10.00pm and will be conducted by Uncle Vijaya, Bro Charlie Chia and Dr Chan Kah Yein. The course will cover Buddhist views on contemporary issues and Buddhist living. All are welcome. Please contact Sis Cindy at 03-56348181 for further details.

4) In conjunction with the 3-month Vassa, Venerable Dhammapala will be conducting a Pali Sutta learning and Chanting in Pali English on Tuesdays (except 12 Aug and 16 Sep) until 7 October 2014, 8.30pm to 10.00pm. All are welcome.

5) SJBA is sponsoring Ven. Punnavisuddhi to study his Degree Masters in Pali at a University in Sri Lanka, RM7,000 per year for 5 years for a total of RM35,000. If you wish to partake in this dana to sponsor Ven. Punnavisuddhi in furthering his study, please contact Sis Lily at 03-56348181.

6) Subang Jaya Buddhist Association is co-organising with the Bodhinyana International Foundation, Australia and the Centre of Mindfulness Limited, Hong Kong, the 1st Buddhist Nuns’ Novitiate Programme in the Theravada Tradition on 7–16 November 2014, under the guidance of Bhikkhuni Hasapanna, Venerable Dhammapala with Ajahn Brahm as the Spiritual Director. This Program will be sponsored by SJBA and the Hong Kong Society of Dhamma Supporters but donations towards the costs of running this Novitiate Programme will be most appreciated. Please visit SJBA website or Facebook (as below) for further information and downloading of application forms.

7) Today’s (10/8/14, Sunday) Dhamma Talk in Mandarin (at 11.30am) is on “Harmonious Life with Harmonious Speech” by Sis Tan Yee Yong. Sis Tan Yee Yong graduated with Bachelor of Science in Computer Sience and MBA. She obtained MA in Buddhist Studies from IBC, Thailand. She is now a Dhamma committee member of SJBA. 今天 (10/8/14, 11.30am) 的讲题是” 和谐的人生-和谐的语言”, 讲师是陈玉容居士. 玉容居士持有科学学士学位及商业硕士学位，在商业界工作。她曾经是我们首邦再也佛教会青年组主席，及佛法小组组长 ，在学佛路上， 她持有佛教文凭及国际佛教大学佛教研究文科硕士 。目前她是我们首邦再也佛教会 佛法委会小组成员.

8) This morning’s (10/8/14, 10.00am) Dhamma Talk in English will be given by Bro Tan Siang Chye. Bro. Siang Chye graduated from Kent Institute, UK and with a Master degree from Massey University, New Zealand. He was a former Chairman of the Buddhist Missionary Youth Section and also the parent body, BMSM for one session. He is a striving meditator and has practised under several prominent meditation teachers locally and in New Zealand. Bro. Siang Chye is currently the Chairman of the Dhamma Committee of SJBA.