1) SJBA is organising an Introduction to Meditation Course conducted by our Abbot, Ven. Nyanaramsi from 26 May to 1 Jun, 8.30pm to 10.30pm (first day orientation followed by 6 lessons) followed by a short Meditation Retreat from 1 Jun to 4 Jun. Ven. Nyanaramsi was an accountant before he was ordained as Bhikkhu in 1995 at Chanmyay Yeiktha Meditation Centre, practicing under Sayadaw U Janakabhivamsa for a total of 9 years. Ven. Nyanaramsi was giving various support for foreign meditators in the Centre before accepting Subang Jaya Buddhist Association’s invitation to come back in 2003 to teach the Malaysian Buddhists. He travels frequently to other countries like Indonesia, Taiwan, Thailand, China, etc to teach meditation. If you wish to join in the Retreat as a yogi, helper or sponsor, please inform Sis. Lily at 03-56348181.

2) Our Mandarin Puja Service will be from 11.30am to 12.30pm today (19th May). Please invite your Mandarin speaking relatives and friends to join us. The gift of the Dhamma is the highest gift.

3) This morning, we are going to have a Dhamma Dialogue on “How do you see yourself as a Buddhist 10 years from now?” to be facilitated by Sayalay Paramacari. Sayalay Paramacari started practising Vipassana Meditation (Mahasi method) based on the Four Foundation of Mindfulness (Maha Satipatthana Sutta) since April 1994 in MBMC, Penang. She obtained a Diploma in Buddhism awarded by The Buddhist & Pali University of Sri Lanka in 1996 and had had attended retreats of the Mahasi tradition in various places in Malaysia & abroad and also attended & exposed to retreats of other traditions in Malaysia and abroad over the years. 1994 – 2005 lived, cultivated in no less than 25 countries as a layperson before taking on the robes.

Sayalay was ordained in the year 2008 by Sayadaw U Pyin Nyar Nanda of Chanmyay Yeikhta, Myanmar in Pyin Oo Lwin, Upper Myanmar. In July 2012, while in India, took up Pabbaja ordination as a 10 precept with 75 sekhiya rules Samaneri with Ven Bhikkhuni Ratatungoda Saddha Sumana, abbess Sri Tusitaramaya in the district of Ratnapura in Sri Lanka.

Prior to becoming a nun, Sayalay had been attached to BSN, Singapore Airlines, Federal Express & EBSCO. She had also worked as a Freelance Trainer specializing in Social Skills, Performance Development, Situational Leadership, 8 Step Coaching for Leaders of all tiers, Effective Communication Skills, Targeted Selection (to select an honest, sincere & suitable employee for a specified job designation) & Building High Performance Team.

May You Be Well & Happy, Always! 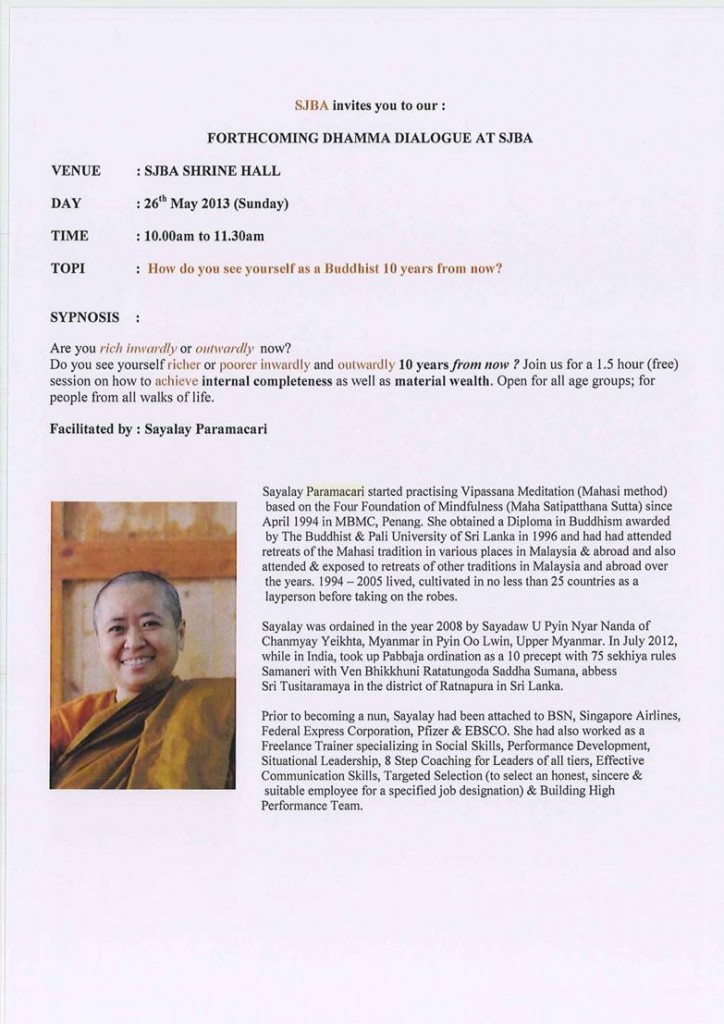